For a better experience please update your browser.

Your browser must have cookies enabled otherwise you will not be able to login or register. Please enable cookies in your browser and then refresh the page to continue.

A night of experimental and electronic music, avant-garde entertainment, visuals and more in aid of Oxfam

A night of experimental and electronic music, avant-garde entertainment, visuals and more in aid of Oxfam

Madam is a five-piece London based band, fronted by charismatic singer-songwriter and composer Sukie Smith. Madam create nocturnal, intricate-yet-cinematic soundscapes with a pop sensibility; songs that are at once confessional and a call to arms.
The band has amassed a loyal legion of fans at home and abroad, showcasing their smoky sound at intimate gigs and packed venues across Europe.

Madam just released their new album ‘Back to the Sea’ to critical acclaim.
http://madamband.com/

DISCONNECTS is a musical and visual project based in South London. The debut album ’11:11’ was released in December 2014, with the follow-up ‘Under’ released in February 2016.

Guy XY is the songwriter moniker of London-based composer Guy Harries. Guy is involved in projects ranging from garage rock to chamber opera, from sound art to electro art pop to multimedia musicals. His songs combine electronica, deep vocals, dark wave and a touch of 1920s Berlin cabaret, with a nod to Marc Almond, Scott Walker and Bowie.
https://soundcloud.com/guy-xy/sets/stripped-mixtape

Petri Huurinainen is a Finnish artist and musician currently living in London. He works predominantly with drawings and live-based sound performances. Throughout the years he has sonically developed his personal vocabulary where music is literally constructed from the instrument itself, by scratching and hitting, abusing and stretching its’ limits. In live performance, this idiosyncratic approach to the instrument, collides with random sampling and incidental loops, that pays homage to Musique- Concrete, resulting complex, often furious rhythms, textures and melodies. In 2016 he released a studio album ‘Exile Nothing’.
http://www.phuurinainen.com/ 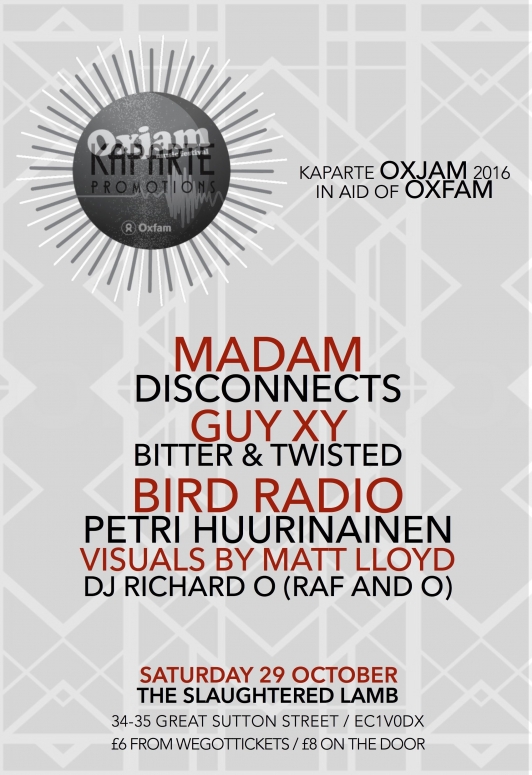